More than 100 entries across a variety of classes have so far been received for the 34th running of Airlie Beach Race Week (ABRW), to be hosted  by Whitsunday Sailing Club (WSC) in the Whitsunday Islands from 11 to 18 August, 2022.

Numbers include those taking part in the Queensland Trailable Yacht Championship. Tim McCall’s Elliott 780 ESPX, Hairy McClary, is the yardstick, having won the Trailable division last year. However, an extremely driven Derek Sheppard is making the trek from Sydney with Black Sheep, which is the same design as Hairy McClary – almost. 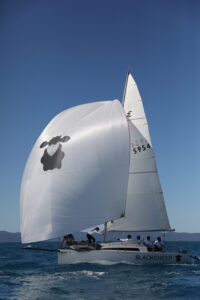 “Tim’s got the fast one – mine’s the slow one – mine’s the cruising configuration. He’s the serious guy and a local, the local will win,” says Sheppard, even though McCall lives 500 kilometres south of Airlie Beach.

“We’re looking forward to the other competition too, especially Unbealeievable (Colin Clark’s 8.5 metre Beale design). We love calling out ‘unbelievable’ to them, on the water and ashore!”

“It’s all about creature comforts for me. I mean Tim even sands his keel,” says Sheppard with a laugh. He is champing at the bit to get to Airlie Beach again having missed the last two due to Covid restrictions.

McCall responds: “I’ve been punished with my handicap, so we’re even with Black Sheep. I’m looking forward to racing against them because the two of us are very competitive, particularly upwind. The starts are fierce between us too. We like beating the Sydney boats…

“I’m also looking forward to racing against Tommy Jordan on Lunasea and Renee Cordingley with her Sonata 26, Bella Amore. We beat her by just one point last year, so hopefully she’ll be back,” McCall ended.

Sheppard added, “We love going to Airlie. You get good breezes and good courses. There’s plenty of good locations, like the Coral Sea Resort – they look after us well. There are a lot of cafes and pubs, the lagoon and Airlie Beach itself. I love the Curlews there too,” he says of one of the local bird species. 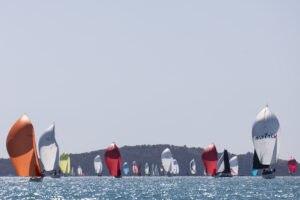 The Multihull Racing divisions are loaded with talent and fast machines again. Among the Division 1 entries is regular, George Owen, with Charleston. He has improved the F28’s performance and will test it out against the best in August.

“The first time we sailed at Airlie Beach, Charleston had poor light wind performance, so we put a new rig on it. Everything has improved except the skipper,” he says laughing.

Perhaps he was remembering being the first casualty last year when Charleston capsized in gusty high winds. It seems likely, because when asked what advice he would give to fellow entrants, Owen quipped: “Keep your mast pointed upwards towards the sky!”

Nevertheless, Owen loves competing at ABRW. “We think it’s a good fair race track. There’s not so many wind shadows around the islands where you can easily win or lose races, but it’s still tricky enough on Pioneer Bay with plenty of shifts,” the Queenslander explains.

“It’s a very well run regatta and the Club (WSC) is friendly with a good atmosphere. There are a lot of people who are very helpful there too, like the Mitchell boys,” he says of local brothers Paul and Dale Mitchell, who are also the ones to beat in multihull racing.

Owen continues, “The competition is fierce but the camaraderie is fantastic.”

“Entries have far exceeded our usual numbers at this early stage. And with the marinas already at capacity, we are doing everything we can to source berthing for entrants,” Ross Chisholm, Event Chairman for the annual Airlie Beach Race Week Festival of Sailing said.

Entry in this annual event is open to boats in IRC, ORCi, AMS, Performance Racing, Cruising, Non-Spinnaker Cruising, Sports Boat, One Design, Trailable Yachts, Multihull Racing, Multihull Passage and Off the Beach boats including the WETA 4.4 trimaran, F16 and F18 catamarans and others.

Airlie Beach Race Week Festival of Sailing is supported by the Queensland Government through Tourism and Events Queensland and is a feature on the It’s Live! in Queensland events calendar.

For NoR, entry and all information on Airlie Beach Race Week, please visit: www.abrw.com.au or www.whitsundaysailingclub.com.au