The weather gods were smiling down on competitors at Airlie Beach Race Week Festival of Sailing again, offering up a superb 10-17 knot south-easterly wind, and bucket loads of sunshine on the penultimate day of the week-long regatta in the Whitsundays.

Whitsunday Sailing Club officials sent the Multihull Racing Division 1 on a windward/leeward course where three races were put to bed. The unstoppable local, Paul Mitchell, won all three on the Extreme 40, Angus. Parabellum (Joel Berg) scored a pair of thirds and a second and Back in Black (Jamie Jochheim) a pair of seconds and a third.

Just 11 seconds decided Race 7, and 22 seconds Race 8. That is how close the racing between the three Extreme 40s has been all week. Angus is now in an unbeatable position on nine points, while Parabellum and Back in Black are on 18 points apiece. The final race tomorrow will break the tie.

Multihull Racing Division 2 sailed a passage race, which was won again by Mark Leitner’s Leitning Storm. He too, has an unassailable lead. Drew Caruthers’ Rushour took second place today, with Terry Archer’s G’Nome in third. These two are on equal 11 points.

Caruthers built a solid lead but could not convert it to a win in the final stages: “We couldn’t quite put it to bed because we had trouble getting back into Pioneer Bay. We were caught in a lull. Leitning missed the lull and beat us,” he said. “Otherwise, today went smoothly, there were no mistakes. 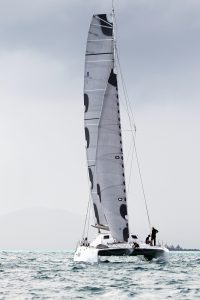 “It was fantastic sailing conditions. On our 24 nautical mile course we had a perfect 10-16 knot sou-easter and we did 23 to 24 knots of boat speed at times.

“It’s been very flat water at Airlie this year and being a large offshore (he has a 15 metre cat) boat, we can’t beat the much smaller and lighter Leitning Storm and G’Nome. But we’re having a good handicap battle with Leitning and loving it – even if they are beating us. It’s been a very good regatta and very enjoyable this week,” Caruthers said.

Jeffrey Dodd’s Zero won Race 5 of the Multihull Passage division. The Schionning 1800SSS got the better of his nearest opponent, Glenn Rutherford’s Earthling, by close to three minutes. However, Marc Girard’s Storm Bay leads the series by two points to Zero, and a further point to Kevin Lord’s Vivacious. Tomorrow will decide the winner, as the three have sailed at the top of the board all week.

In Performance Cruising Division 3, the pointscore is just as close. Airlie Beach first timer, Keith Falkenhagen, sailed Blue Moon to its second win of the regatta today and regained the overall lead into the bargain. Nobody could be more surprised than him.

The Moreton Bay sailor and his Beneteau Oceanis 461 are two points ahead of Kindred Spirit (Richard Holroyd), and four ahead of James Jarvis’ Jubilation.

Falkenhagen said, “Jubilation; we usually finish within a short time of each other. They are great guys. It’s been a positive and jovial experience – and that’s what we came here for. This is our first Race Week. Other than this, we’ve only done Club racing. We’re thrilled to bits and just as shocked as everyone else to be doing so well!”

The Queenslander has only owned the boat for a little over two years and hasn’t raced for  30 years. “Weird thing is, I bought it to go cruising, but have been racing since. The courses have been great and the race management have too. They are precise and negotiable at the same time – and they listen,” Falkenhagen said.

“It’s on the cards we’ll be back, I love it in the Whitsundays. After this regatta, we’re heading to Whitehaven and to Gloucester and then we’ll take advantage of the northerlies and work our way back home.”