Day 1 out of the way, officials and competitors at Whitsunday Sailing Club’s annual Airlie Beach Race Week have dusted themselves off after the night’s celebrations and are now looking forward to the day ahead, which Event Chairman, Ross Chisholm, says, “should be champagne sailing.”

Chisholm says, “We’re expecting the breeze to be a bit lighter than yesterday. The forecast is for a 10-15 south-easter. Unlike yesterday, the sun is shining through a couple of clouds, so it should be a good day for all.”

On Day 2, the WETA trimarans will take to windward/leeward courses on which they will do most days. The rest of the fleet will gather on Pioneer Bay for a Passage Race clockwise around the Molles.

“We had a couple of late arrivals last night that will join the fleet today,” Chisholm says, “and Rossgo is ready to go again, her broken rudder now fixed.”

It goes without saying that competitors enjoyed their first day of racing yesterday, because for many, it was a first time back on the water in almost a year because of the Pandemic.

Storm Bay’s owner, Marc Gerard is hoping to pick up where he left off yesterday – at the top of the Multihull Passage scoreboard. His Chamberlin Cruising 14 catamaran fended off challenges and he beat Gavin Le Sueur’s Favourite Child to the punch by a little over two minutes. 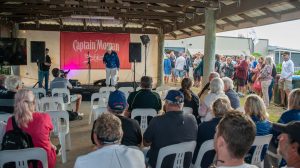 In Performance Cruising 1 division, perennial regatta attendee, James Irvine, is at the top of the leaderboard with Mayfair, the Rogers 46 he purchased in 2020. Airlie Beach Race Week Festival of Sailing regular, Mal Robertson with Eureka II, is poised in second place with Victorian entry Carrera S, owned by Gerry Cantwell, in third.

Rob Davis is at the top of Performance Cruising 3, after sailing Treasure VIII, his Reichel/Pugh 36 to its handicap advantage. Today’s lighter winds will be telling and may give the second placed crew on Tasmanian Brett Cooper’s Crusader Clennett’s Mitre 10 the upper hand. Cooper and his wife Jacinta are slippery sailors and have swapped their yacht Mistraal for a frisky Melges 32, which they are both enjoying. Aboard for the ride is Darren ‘Twirler’ Jones, a fellow Tasmanian now living in South Australia with serious international sailing cred.

Racing is due to start from 10am this morning.